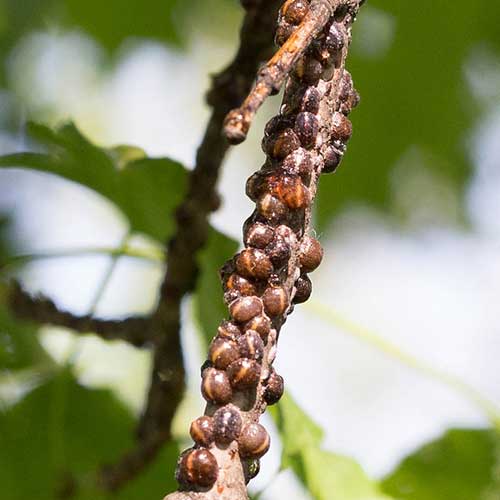 Armored scale attach themselves to a branch of a tree where they suck the nutrients out of the infested branch.

Hardshell scale, also known as armored scale, can refer to multiple species of insects that attach themselves to and feed on tree branches. The 'hardshell' from which these insects get their name refers to the hard wax shell that forms around the insect after it begins feeding.

Depending on the specific species, scale can infest any number of plants. Among the species that hard-shell scale infect are:

Hardshell scale insects tend to cause more damage to their host plant than their soft-shelled counterparts. The hardshell scale feed on the individual plant cells which disrupts the flow of nutrients within the plant. This will lead to the death of the infested branch. While limb death is the most common damage caused by hardshell scare, total plant death is possible in cases of very heavy infestation.

While the specific timeframe that a hardshell scale will cause damage varies from species to species, the majority of hardshell scale insects will begin to feed in May or June.