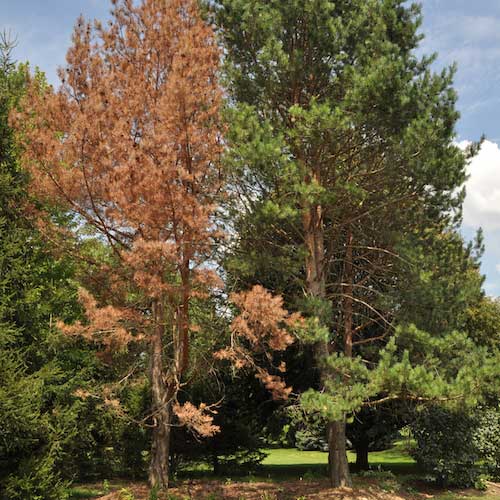 Pine Wilt Nematode is a roundworm that causes pine wilt disease to occur.

Pine wilt nematode is a species of microscopic, worm-like animals that feeds on pine trees and causes pine wilt disease. The nematode was first discovered in the United States and it is believed to be native to North America.

Once mature nematodes enter a susceptible host they will begin feeding on the cells lining the resin canals. This feeding causes the tree's water-transporting system to become clogged. Once this happens the typical symptoms of wilt will begin to show and the tree will die soon after.

Nematodes are unable to travel very far on their own. Because of this they are reliant on other insects, most notable of these being the pine sawyer beetle. This closely intertwines the life cycle of the pine wilt nematode with that of the pine sawyer beetle. The beetles lay their eggs under the bark of pines typically during late summer. After the grubs hatch they bore deep into the wood of the tree. While the grubs are maturing, the pine wilt nematodes mature as well. The nematode larvae enter into the breathing tubes of the new adult beetle where there are carried by the tens of thousands to healthy trees.