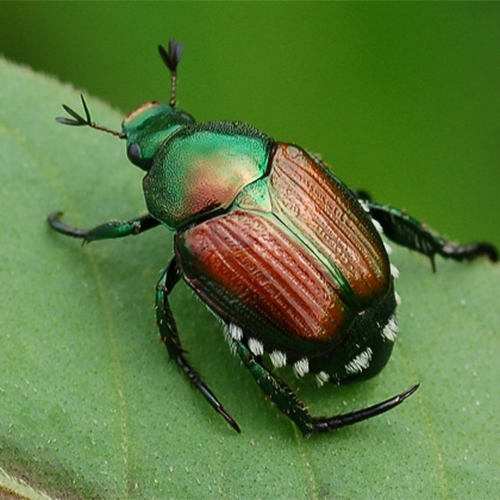 The Japanese Beetle is a nuisance insect that eats the leaves of many common household trees.

The Japanese beetle (Popillia japonica) is an invasive species of insect that is native to Japan. While the insect does not cause very much damage in Japan due to the fact that it is controlled by native predators, Japanese beetles can cause significant damage to plants in North America. Japanese beetles can be identified by their distinctive brown color and the 12 white dots that surround their abdomen.

Japanese beetles can infest and cause damage to numbers species of plants and trees. Among the most susceptible species are birch and linden trees. Other affected species include:

Japanese beetles skeletonize the leaves of their host plants. This means that they eat the green leafy material and leave the veins intact. Japanese beetles will also feed on the fruit of a plant if there is fruit present. Additionally the grubs of the Japanese beetle have been known to feed on the roots of plants and grasses causing significant damage and plant death. Visible damage from Japanese beetle tropically occurs at the top of the plant and gradually works its way downward.

The timeframe for specific plant damage depends on the plant that is infested. However newly developed adult Japanese beetles will emerge in early July and will begin feeding ton nearby foliage. Japanese beetle activity is most intense over a 6-8 week period after the new adults have emerged. Japanese beetle grubs are born underground in late summer and develop quickly. During late summer and again the following spring is when grub damage is most likely to occur.