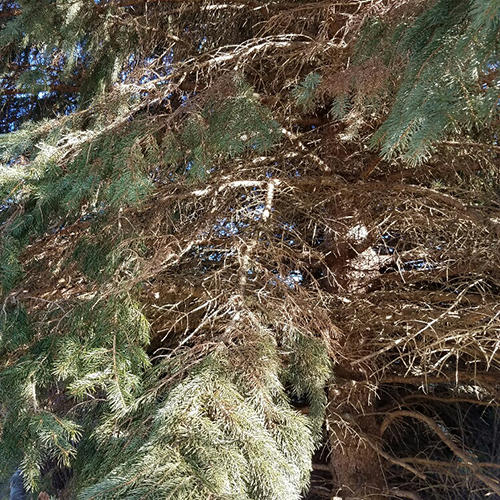 Rhizospaera Needle Cast (RNC) is a fungal disease that causes needle cast and premature death of needles in conifer trees.

Colorado blue spruce is the most susceptible species to this disease, however many forms of spruce trees can become infected as well. Additionally, RNC is more likely to impact trees that are stressed from drought or other stress-causing factors.

Infected needles will begin by turning yellow in mid to late summer and will turn brown by late winter or early spring. RNC tends to affect the older needles which are closer to the trunk more than it affects newer growth. Infected needles will begin to fall off the following summer which is typically 12-15 months after the initial infection. Typically damage will first show on the lower branches and will move up the tree as the disease progresses.

The pathogen lives throughout the winter on the living as well as the recently killed needles of its host. The spores are spread via splashing water during the spring and summer months. During optimal conditions a spore will infect its new host in as little as 48 hours. RNC can be difficult to detect due to the fact that symptoms don't typically appear on the tree until several moths after the initial infection.

A tree infected with RNC will lose much of its aesthetic appeal due to the dying of needles and branches. A tree that is infected for 3-4 consecutive years without being treated will begin to die. A phenomenon known as "witch's broom" is a growth defect which will also occur in trees infected with RNC.

A spray program is used to treat for RNC. The program consists of two sprays in the spring: one before the new growth appears, and the second spray three weeks later. The active ingredients in the spray are a contact fungicide called chlorothalonil, a second copper based fungicide called mancozeb, and a systemic fungicide called propiconazole.  This combination of fungicides help to reduce the chance that certain strains of fungi become resistant to treatment.  A contact fungicide works by killing spores that land on the needles, and a systemic fungicide works by being absorbed into the needles and attacking any fungus that may have already penetrated the needles.