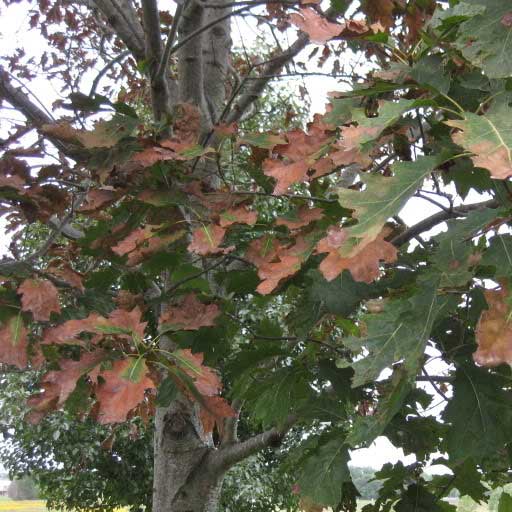 One of the early signs of oak wilt is a browning along the outside of the leaf.

Oak Wilt is a fungal disease that affects oak trees. Oak Wilt is considered just as dangerous to oaks as Dutch Elm Disease is to elms. The disease has been found in 21 states and most of its damage occurs in the midwest.

Oak Wilt disease will kill its host plant very quickly. Early signs of the disease include a browning around the edges of the leaves which gradually move towards the center. Leaves falling off the tree is also a common symptom of Oak Wilt. Leaves will fall off the tree at various stages of discoloration.

Oak Wilt can be moved into a tree two different ways. The fungus can be introduced to the tree via beetle. Spores are carried by the beetle and if the tree has an open wound, then the fungal spores can enter into the vascular system of the tree.

Pruning is the second way that oak wilt can be introduced to a tree. If a blade is not properly disinfected between cuts, the oak wilt fungus can be transferred to different branches which will cause the disease to quickly spread.

Oak wilt can also be spread via the root systems of trees.

The disease will spread the following year from the tree that died.

Once oak wilt is contracted in the tree, there is really no way to save it. After symptoms appear, some trees may die in as little as one month. The majority of infected trees will die within a year of contracting oak wilt.

Trenching below the ground to separate the root systems of trees is key in preventing the spread of the disease. Injections with a fungicide can be done preventatively if your trees are at risk.