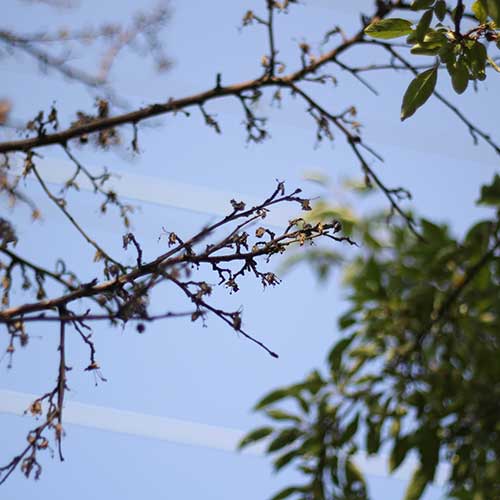 Fire Blight gets its name from the blackened appearance of leaves that have been infected with the disease.

Fire Blight is contagious disease that is caused by the pathogen Erwinia amylovora. The pathogen is a bacteria that is believed to be native to North America from where it spread to most of the rest of the world.

Fire Blight affects many commercial fruit-bearing trees, but pears are by far the most susceptible. However apples, crabapples, quinces, and raspberries are vulnerable as well along with several other species of rosaceous plants.

The name 'Fire Blight' refers to the appearance of the manifestation of the disease. An infected tree's leaves and blossoms will appear blackened and shriveled as though they were scorched by a fire.

The disease causing pathogen can be transmitted to a host via insects such as honeybees or by rainwater or through the air. Damaged tissue is highly susceptible to infection. The bacterium enters the plant through open stomata and causes blackened, necrotic lesions. The disease spreads most quickly during periods of hot, wet weather. Fire blight bacteria is dormant during the winter.

Once infected with Fire Blight, a tree will die if it is not treated. Because the disease is highly contagious, it is of high concern to commercial growers of pears and apples. Fire Blight can destroy an entire orchard of trees in a single growing season if not treated for.

Infected plants are injected with a fungicide called Whippet. This injection will stop the disease.