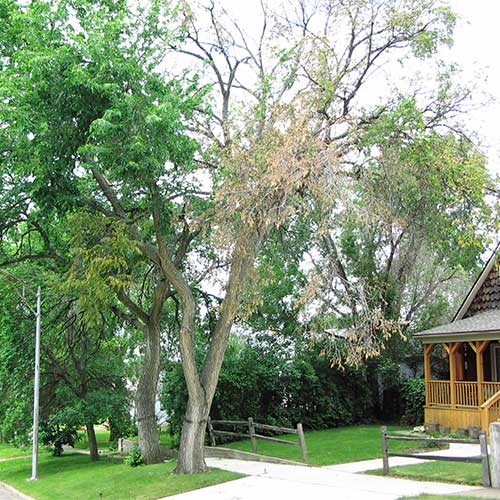 Dutch Elm Disease (DED) is caused by a fungus which is spread by the elm bark beetle. The disease is native to asia, but has spread to Europe and North America where it has caused devastation due to the lack of resistant species in those regions. The 'Dutch' refers to the scientists who first identified the disease in the Netherlands in 1921.

As the name would imply, DED infects elm trees. All native North American species of elm trees are susceptible to the disease. Chinese elms however are resistant and breeders have created several Asian and American elm hybrids which are resistant to DED.

The first sign of DED is the leaves of an upper branch of the tree turning yellow and brown before falling off the tree unseasonably early. As the disease progresses the lower branches' leaves will wilt and fall off. A branch that has lost it's leaves is dead and those leaves will not grow back. Depending on the susceptibility of the tree, the infected tree could die as early as the first season it is infected.

The fungus that causes DED can not move via wind or water. Therefore, the only way the fungus moves from host to host is by beetle, or by connected roots. Once the fungal spores enter the tree's vascular system, they are carried up the tree with the flow of water. The disease then moves downward from the top of the tree until it reaches the roots. A highly susceptible tree could have the disease reach and kill it's root system within the first season of infection.

The tree will die.

We inject elm trees with a fungicide called Shepherd. The injection lasts for two years and it must be repeated. The injection also must be made preventatively, because once a tree has been infected it can not be treated.