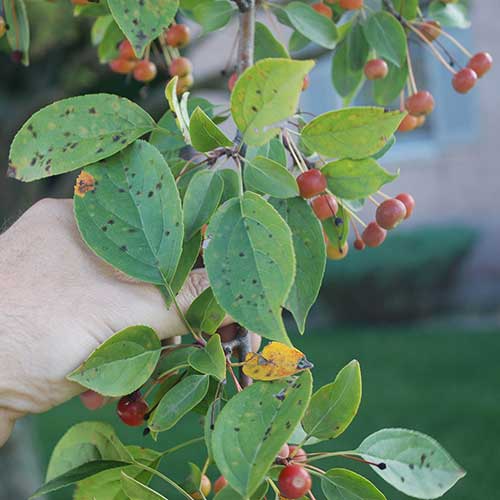 Apple scab is a fungal disease that causes premature leaf drop on many flowering trees in our landscapes. Many homeowners call with the concern, “Why are leaves falling off my crabapples?”

Apple scab is a disease that primarily affects the Malus genus of trees, which includes apples and crabapples. The disease is caused by a fungus known as Venturia inaequalis. The fungus embeds into the tissue of the plant, where it causes lesions and spots on both the leaves and fruit.

As the name would imply, apple scab is a disease that targets various species of orchard apple and ornamental crabapple trees. These types of trees, belonging to the Malus genus, are native to the temperate zone of the northern hemisphere.

Apple scab can be identified by the dull black or brownish lesions that will appear on the fruit and leaves of an infected tree. Many times, large yellow areas develop on the leaves. Occasionally, but less commonly, lesions will appear on the woody tissue of the tree.

This disease is best described as having multiple cycles. The apple scab infection begins in the spring time shortly after the trees leaf out. This happens because the moisture and mild temperatures are the ideal environment for Venturia inaequalis spores to be released. The disease is far worse in years when night-time temperatures are cool, while day-time temperatures have high humidity in the early part of May. The fungal spores travel through the air. Once attached to a susceptible host, the spores germinate and penetrate the cuticle of the plant, where they then reproduce. The fungus continues to mature, release additional spores, and re-infect orchard apples and ornamental crabapples throughout the summer months. Eventually, the leaves and fruit fall off the tree prematurely to their traditional time in fall.

Apple scab is rarely fatal to the trees it infects. If orchard apples are left untreated, the fungus will greatly decrease the overall fruit yield of the infected tree. The disease will also negatively impact the quality of the fruit that is produced due to the appearance of the fungal lesions. If an ornamental crabapple is left untreated, discoloration of the leaves and fruit, as well as premature leaf drop will occur. If either type of tree remains infected for an extended period, typically 20 years or more, then apple scab could be fatal due to a lack of sugar production in the tree.

We can control apple scab by applying both a contact and a systemic fungicide spray. The application happens in two to three rounds of spraying beginning in the early spring. The two different fungicides prevent new spores from germinating on the leaves and attacks any actively growing fungus in the leaves. The goal is to protect the leaves to where they remain on the tree until they can fall of at the traditional time in the fall season. As this disease is constantly attacking these types of trees, some level of infection will need to be tolerated, even with treatment.

As this disease will return year after year to bother susceptible varieties, one very good control method is to consider planting a resistant variety in place of the susceptible one. This will drastically reduce cost of treatment, in addition to being more environmentally friendly as it reduces the need for fungicide sprays.