Very commonly, Pin Oaks show mild-to-severe signs of chlorosis. Most of the time, it is the story of the wrong tree planted in the wrong place. Pin Oaks love well-drained, gravely soils with a pH level less than 7.0 (acidic). However, all throughout the Midwest, we find Pin Oaks planted in compacted, clay soils aggravated by high pH levels and too much irrigation for the lawns nearby.

I have been able to treat some severely chlorotic trees over the years, and I have gotten great results. One such site was in Roselle, Illinois. This first picture was taken in mid-June 2013. The Pin Oak had a perfect shape, but was a golden yellow. If you were to look closely at the leaves, very little green was apparent, even in the veins. The client had treated this tree in the past with other arborists, but not much ever changed. The more advances stages of chlorosis, which include dying branches and large sections turning brown had not yet occurred, but would be inevitable if something was not started quickly. The drought of 2012 had also affected many trees in the area.

In mid-June 2013, I treated this tree with two separate treatments. I prefer chlorotic situations in which I can avoid trunk injection and deal with only the treatment of the soil. This approach is less invasive and less likely to create a ‘tree junkie!’ This is my term for a tree that has become dependent upon future injections to supply it with the nutrients (primarily iron and manganese) that it cannot seem to obtain from the soil on its own. If I can gradually change the soil chemistry to provide a more beneficial arrangement between the soil micro-organisms and the trees roots, then we may be able to train the tree to ‘feed itself.’ In this situation in Roselle, however, the chlorosis was so severe that I felt I had to do both a soil and a trunk injection.

The homeowner was not so sure that he would see the drastic results that I was promising. Nevertheless, I told him to ‘stand back and be prepared to be amazed!’ I told him that by the end of the summer, his Pin Oak would be gorgeous. I decided to take before and after pictures to document the ‘magic act.’

This is the same tree just five weeks later. 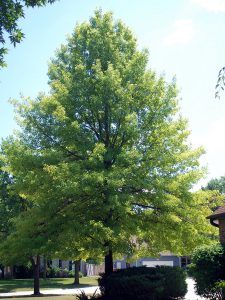 Needless to say, the homeowner’s jaw dropped. He had known me for several years from the ash trees that I was treating in his neighborhood (Emerald Tree Care LLC had the contract to treat parkway ash trees for the Village of Roselle). Even though we are a tree and plant healthcare company, he had never thought to chat with me about his Pin Oak.

Even with this drastic change in color after five weeks, I told the homeowner that there was still some discoloration in the leaves between the leaf veins and the rest of the leaf.

After an additional five weeks had passed from the soil treatment and the trunk injection, there was even less yellowing in the leaves present. The Pin Oak was no longer presenting itself as having any kind of a nutrient deficiency. The full transformation occurred between the middle of June and the end of August – right during the heat of the summer.

If you notice a tree in your yard showing signs of chlorosis, I can fix it. Be sure to hire the very best! Get a Board Certified Master Arborist involved with the tree and plant healthcare of your property.

Together we can make a difference!